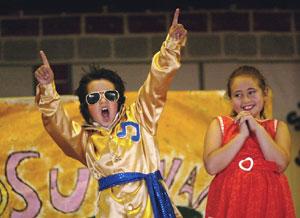 This summer camp puts on quite a show

YOUNGSTERS GET A CHANCE TO PERFORM MUSICAL

It’s the first day of Hope Musical Theatre camp, and already the kids are singing.

They stand in a line, 15 of them, across the stage in the
multipurpose room at Addison Elementary School in Palo Alto. They
clutch pieces of paper printed with song lyrics. Their director, Sarah
Hope, shouts out tips: Smile! Have energy! Enunciate!

“Wait,” Rebecca Hassine, 8, says warily. “Are we going to sing the parts today?”

Never mind that only half of them have been on stage before. Never
mind that few of them knew an hour ago that they were going to be in a
musical. By the end of today, they’ll be the cast of “Bye Bye
Birdie.” In just two weeks, they’ll perform.

Theater on the bound

Sarah Hope can’t remember a time when she wasn’t a director. She
took over her Castro Valley High School’s theater program when she was
still a student. While studying at the Tisch School of the Arts at New
York University, she taught theater classes for children in the Bronx
and Queens.

When she moved back to the Bay Area in 2000, her aunt suggested she
try teaching theater in Palo Alto. She started with one after-school
workshop at Walter Hays Elementary School. Now, she runs programs each
semester at four Palo Alto schools.

But summer is when things really get crazy.

Ten groups of kids from Palo Alto and throughout the Peninsula. Ten
shows with sets and costumes and choreography. Ten days of rehearsal,
three hours per day, before each performance.

One by one, each young performer climbs the steps to the stage. Each
calls out his or her camp name: “I’m Hesitant Helen!” “I’m
Interesting Isabel!” “I’m Optimistic Olivia!”

Some belt out their songs, eyes fixed on an imaginary audience.
Others smile shyly and look to Hope for help. Some do cartwheels.
Others dance so hard they fall down.

After each kid has performed, the piano player starts a lively tune.
Hope calls everyone on stage. For five minutes, they dance — arms
waving, hair flying, mouths opening into wide grins.

Tomorrow they’ll get their parts.

It’s Friday. Day Five. A sign hangs beside the stage: “All lines memorized by Monday!”

Already, most of the actors are doing their scenes without scripts
— including Julian Hornik, 10, who’s playing Conrad Birdie, the
Elvis-like singer at the center of the show.

Julian has been in Hope Musical Theatre shows since he was in first
grade, when his family moved to Palo Alto. He had always been a ham,
and when his mother, Pamela Hornik, learned about Hope’s program,
Julian begged to go.

It was just the beginning. He’s since performed in shows in San
Jose, San Francisco and Palo Alto. But he always comes back to Hope
Musical Theatre — every summer, every after-school session.

“Theater gave him his sense of self,” his mother said. “He was
having a hard time adjusting. Being in Hope Musical Theatre, he
immediately was a part of something special.”

Today, Julian is practicing one of his many solo songs, sitting at the edge of the stage while Hope coaches him.

As Julian sings, Maddie Martinson twirls at the front of the stage.
Last year, Maddie played Princess No. 12 in “The Princess and the
Pea.” This year she has two speaking roles.

When she performs, she said, “I feel like I’m dancing in the air.”

Two rehearsals later, there’s a new sign up: “Don’t forget to spread the word about our performance on Friday!”

This is crunch time, Hope says. The glittery backdrops have been
painted. The props have arrived. Now it’s time to focus on the
characters.

Hope wants her actors to understand their roles. For “Bye Bye
Birdie,” she’s had her students learn about Elvis. She’s had them
hand-jive with their parents. She’s explained that teenagers should
squeal and parents should frown.

When Ellie Nichols, 8, leaps onto the stage for a song, Hope cuts the performance short.

“Remember, you’re a parent,” she says. “Parents don’t hop much.”

A few minutes later, Regan Dwight, 6, accidentally marches out with
the Conrad Birdie-obsessed girls. Hope laughs so hard she can barely
call the number to a halt.

“I didn’t know you were part of the Conrad Birdie fan club,” she finally says.

It’s a packed house for the performance. Parents fill most of the
metal folding chairs. Brothers, sisters and friends sit in rows on the
floor, almost all the way to the piano.

Outside, cast members wriggle into costumes and get their cheeks dusted with blush.

The show goes on

Hope gathers her cast on stage for a pep talk. The dress rehearsal wasn’t perfect, she says. Everyone needs to focus.

“You’re going to have a great show,” she says.

And, for the most part, they do. There are some bungled scenes, some
forgotten dances. But the audience laughs, the songs are loud and
clear, and the cast members cover for each other when somebody misses a
line.

When the show is over, the audience floods onto the sidewalk behind
the multipurpose room, waiting with hugs and flowers. The kids get a
quick wipe-down to remove their make-up, then run off to greet their
smiling parents.

“I was really impressed,” Mark Dwight says, hugging his son Harrison. “You have a great stage presence.”

“I thought it was kind of good,” Harrison says. “Except that one line I forgot — and it was a big one.” But he’s laughing.

On Monday, new actors and actresses will come to Hope Musical
Theatre. They’ll learn their dances. They’ll get costumes and put on a
show.

But for now, these kids are the stars.